Each year over the Queen’s Birthday weekend, a stage race is held by three of the five Gippsland cycling clubs. The organizers of these events are collectively known as the Gippsland Delegates.

For a personal project, I spent a Friday evening designing and coding the 2013 Gippsland 3 Day Tour website – in 2011, a site was created to support this Queens Birthday tour. In 2012, the site url was dead and being keen on this event, I wanted a site dedicated to this year’s tour.

As a themed branding exercise, race programs for the years 2008-2013 were created, Here the overall design was maintained for each year, with the colour scheme changing.

The colour scheme for the 2013 Thee Day Tour site mirrors that of the race program for 2013. I expect to continue this themed branding for the 2014 event.

I have continued to run social media and the website though the 2014 and 2015 editions of the event.

For the 2013 edition of the Gippsland 3 Day Tour, I also managed the social media for the event with a Facebook page and Twitter feed.

In 2013 I also handled the time keeping. There were a few bumps due to some coding errors, but they were ironed out as the race served as a “performance qualification” for my tracking spreadsheet which can be downloaded here.

As part of the 2012 tour, stage results and final results were produced within four hours of the stage finishes. Pretty good considering I was competing in the race. 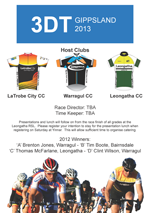 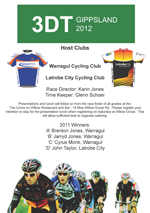 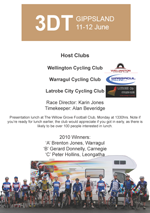 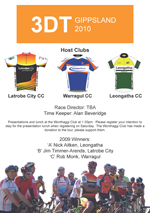 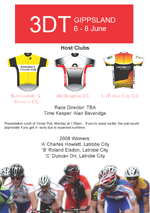 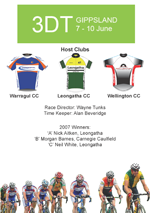